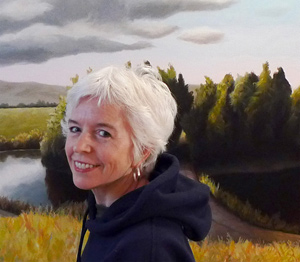 “I don’t think of myself as a realist painter in the currently accepted sense. I work from photographs, which are themselves abstractions – one step removed from reality. I travel further into abstraction by removing details, shifting things around, changing perspective, exaggerating the quality, color, and direction of light, investing the shadows with greater emotional intensity. The paintings wander far afield of straightforward observations of reality, and instead become my own emotional response to the places and objects depicted.”

Her work is included in numerous public and private collections, including the Whatcom Museum, Western Washington University, the U. of WA. Medical Center, Swedish Hospital, the Washington State Art Consortium, Microsoft, the Ballinglen Arts Foundation in Ireland, and the Empress Zoe Hotel in Istanbul.